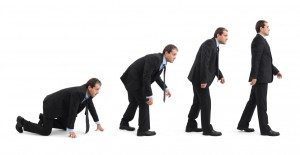 Isn’t it amazing when someone comes up with an idea and everyone says “That’s obvious, why didn’t they do this 5 years ago?” It’s more amazing still that when the idea catches on nobody would think of going back to the old way of doing things.

Malcolm Gladwell talks a lot about this in his book, The Tipping Point.

It’s a national law that when you talk about innovation you have to mention Apple’s i-Phone… touch screen technology and phones. Seems so obvious now.

Go back further… who can even remember the need for users to type “computer commands”… who the heck would give up their mouse and go back to DOS prompts?

What all these innovations have in common is 1) They made life easier 2) Looking back, they seem obvious 3) Nobody would think of turning back the clock now.

Well let’s apply that to corporate budgeting. Don’t laugh, give me a minute.

Decades ago budgeting was done on Accounting Pads. You know, those long green pads with all those columns in them.

The idea was you’d list your G/L accounts, then put what you spent last year in one column and the budget for next year in another. Maybe you’d add a variance column. This was called… “budgeting.”

And thus the standard of budgeting technology was established. This is Generation One (G1).

Then in the 1970’s a company called VisiCalc came along and created what amounted to an electronic Accountant’s Pad. Rather than have to break out a calculator to add stuff up, you could just program formulas in the software!

[But the founders at VisiCalc made sure that the basic look and feel was something accountants were already familiar with. Rows and columns that resembled your basic accounting pad.]

This became the new standard of budgeting technology or G2. Circa 1975.

Skip ahead to the 1980s and Lotus 1-2-3 which introduced a much easier to program electronic spreadsheet. In fact, so much easier that people stopped using the term “programming” and replaced it with “formula writing”. Of course, you still needed to memorize weird syntax like backslash, F, S just to save a file (I am not making this up).

[But the founders at Lotus 1-2-3 made sure that the basic look and feel was something accountants were already familiar with. Rows and columns that resembled VisiCalc… which was made to resemble a basic accounting pad.]

This became the new standard of budgeting technology or G3. Circa 1982.

Well, then a company in Redmond Washington — a town not known previously as a hotbed of innovation — rocked the budgeting world with the introduction Excel. Mouse clicks and drop-down menus replaced cryptic commands.

[But the developers of Excel made sure that the basic look and feel was something accountants were already familiar with. Rows and columns that resembled Lotus 1-2-3… which was made to resemble VisiCalc… which made to resemble a basic accounting pad.]

This became the new standard of budgeting technology or G4. Circa 1990.

Starting to see a trend?

Well now we get to a point where I can’t name names or show you screen shots without getting into hot water with some pretty big names-who-will-not-be-named. But let me explain where we are.

From a formula writing perspective, corporate budgeting applications have never been more capable. G5 (Generation 5) Gets the quant jock in all of us pretty excited.

This is the new standard of budgeting technology?

Well, no. Thankfully our story does not end there. Would be sad to think that 40 years have gone by, and for all the bells and whistles, for all the nested what-if formulas, the basic interface for budgeting still looks like a spreadsheet… or Accountant’s Pad. That would be sad indeed.

The good news is that the new standard of budgeting has finally broken away from the columns and rows paradigm created by our ancestors before the Beatles broke up. Welcome to G6.

The latest generation of budgeting applications eliminates the need for users to write common formulas used in budgeting, and replace them with plain English prompts and commands. They guide the user through the process. For example, one of the latest generation of budgeting applications, XLerant’s BudgetPak, uses something called a Budget Navigator (almost like a GPS for budgeting) and in that respect it has more in common with one of those popular tax preparation packages than a spreadsheet.

The whole idea is to eliminate the friction that characterizes most budgeting processes and get more willing participation from line managers. More accountability, better transparency, improved communication, and ownership of the numbers. Benefits that are impossible to get with traditional columns and rows budgeting interface.

So don’t be surprised when plain English applications take over budgeting, and people say “That’s so obvious, why didn’t they do this 5 years ago?”