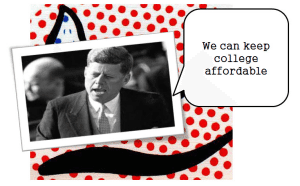 When President Kennedy challenged the country to put a man on the moon and return him safely to earth by the end of the decade, it became known as “the moon shot.” The challenge was bold, the mission was clear, and everyone knew sacrifices had to be made to accomplish a great goal.

The moon shot for Higher Ed is to make college affordable.

To achieve that goal, I believe fiscal accountability must be driven down to the department heads that actually spend the money. Making College affordable is an institution-wide goal requiring an institution-wide response. Keeping the challenge of fiscal accountability tucked inside the walls of the finance department or President’s office is a fundamental mistake that will preclude any real progress on sustainable college affordability.

I’ll have more on a recommended response to the crisis in Higher Ed later on, but first let’s take a look at what’s behind it.

The Crisis in Higher Education

Since this year’s high school seniors were born, the average tuition at colleges have more than doubled, far outstripping inflation or national averages for salary and wage increases. That’s attracted both White House and Congressional attention. Secretary Arne Duncan called on college and university officials to show more urgency in keeping down their prices and spending, the House subcommittee on postsecondary education has held hearings about college unaffordability, and President Obama summoned a select group of college presidents and higher education thought leaders earlier this year to consider what can be done.

There’s been a lot of speculation about how we got here, but let me share my own take.

A college degree has been an integral part of the American Dream since the GI Bill gave returning WW2 soldiers access to higher education that only privileged sons and daughters had enjoyed before. What had seemed out of reach for so many generations of Americans became attainable; all it took was hard work.

Then came baby boom generation, and both the sheer number of graduates swelled, and so did expectations about everyone having the opportunity to attend college. So by 1970 the number of students grew close to 300% from the time their parents were college age.

But here’s what’s even more surprising. The number of college students was 11.5 million in 1980. By 2009 it had nearly doubled. Everyone who could possibly send their child to college did, and parents would do nearly anything to give their children a shot at the American Dream. And by “anything” I mean take out a second mortgage on their home, something banks made easier and easier to do in the decade 1998 to 2008.

Colleges were not fiscally disciplined, and frankly there was little need for them to be. There was a lot of “keeping up with the Joneses” on college campuses. As Sushi bars and coffee houses were added on one campus, other colleges joined suit. You could even argue that if rising applicants and enrollment was the goal, colleges made the right decision to add amenities rather than manage costs. As long as parents and students could find a way to pay for increasing tuition, there was no real need to be fiscally disciplined.

But now there is.

Home equity as a source of funding for tuition has all but dried up. With millions of Americans out of work and unemployment viscously stuck at high levels, incomes have dried up too. Shifting the burden to students themselves is an unattractive answer. Unemployment is high among recent college graduates, and even at low interest rates it will takes years for many of them to repay their debt. And that’s with tuition being where it is today. We simply can’t afford tuition increases – not students, not their parents, not the nation.

The Challenge | The Inspiration

I mentioned at the start of this blog post that the goal is to keep college affordable. But a moon shot goal not only throws down a major challenge, but it makes it specific (hence Kennedy’s timeframe “by the end of the decade”). So I’d like to refine the moon shot challenge for Higher Ed as:

Can you really hold costs flat, without letting quality suffer as a result? Is that even possible? That may appear to be an out-of-reach goal, but there are examples of organizations facing and conquering similar challenges. These inspiring examples are from industry, but the core, fundamental lessons carry over into Higher Ed.

I worked at PepsiCola International when the CEO of the company said a core strategy the company had to execute in order to sustain value for its customers and shareholders was to hold cost flat for five years – in the face of rising volumes. In other words, the company was challenged to lower costs on a per unit basis so every case of Pepsi was made for less money. If you think that quality was something that could be lowered as a way of achieving that goal, you know nothing about Pepsi. Nobody even suggested that.

The seemingly impossible goal mobilized the company from the top right down to the factory floor. Improvements in the manufacturing process were discovered, contracts were renegotiated with suppliers, and the workforce was trained in Total Quality / Continuous Improvement. The entire mindset of the company was changed. It worked.

Here’s another example. Mercedes Benz was the undisputed leader in mass produced luxury cars for years. In those days, market research would find out what people wanted in a luxury automobile, and the engineers would design it into the car; and the cost would be passed right along to the consumer. Pretty simple. Then Lexus and Infinity came along and ate their lunch. A complete mind shift was required of the engineers, and of the company as a whole. Yes, continue to find out what people want in a luxury automobile. But engineer it in a way that would deliver that car at $X – a price that was essentially set by competitors that had redefined the luxury market. At first the engineers objected. They had never in the company’s history ever had to consider cost, “We’re engineers, not bean-counters.” But when they understood the long term viability of the company was at stake, they embraced the challenge, and so did the rest of the company.

The lesson to take away is the challenge defines what’s possible.

The moon shot challenge; however, changes everything. “Make College Affordable by Holding Tuition Flat for Three Years.” You can’t achieve that without a change in culture – one that makes department heads fiscally knowledgeable, capable, and accountable. You can’t achieve flat tuition with fundamentally rethinking how business is done on the college campus. You can’t reach the moon shot goal of three years of flat tuition without empowering people to make smart choices. And you can’t do it alone – it’s an institution wide imperative.

We face a challenge in Higher Ed. A challenge to make college affordable, to give kids a shot at a better life, to keep a crucial part of the American Dream alive.

What role will you play?

For those of you who would like to read more on this topic, I would recommend:

The Next Crisis: Higher Education

Crisis in higher education: tuition costs may be at tipping point

Price Back in the Spotlight

The Truth About the Crisis in Higher Education Finance

Obama to colleges: Keep costs down, or risk losing funding

Clark College President Bob Knight: State funding has gone down, but ‘we’re not sitting around whining about it’

Colleges can do more to cut costs

Time to look beyond tuition to balance college budgets