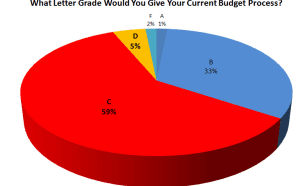 XLerant recently completed a survey on budgeting and I wanted to share some of the highlights with you here.

Budgeting is mission critical. You probably already knew that, but isn’t it comforting to know that a majority (over 90%) of your peers agree with you?

Budgeting is getting more scrutiny than in the past. Given the economic downturn, and the need to do more with less, again, that might not be surprising to a lot of you. On the other hand, misery loves company. You’re not the only one feeling the heat… more than 2/3 of survey respondents are feelin’ it too.

It’s a matter of Control AND Flexibility. Survey respondents said that they want to improve financial control in the process… and they wanted to improve end user flexibility to prepare a better budget. Overwhelming they said they wanted both. Now before you conclude that you can’t have your cake and it eat too; I think the underlying desire is to provide flexibility in a controlled environment – and that is an achievable goal.

Excel is the most widely used application for budgeting. Approximately two thirds of respondents said they’re using Excel for budgeting; about 10% are using whatever their ERP system has to offer, and the rest are using a combination of purpose-built third party tools or something home grown.

The Chief Complaint of Finance: “The mechanics take too much time, and they don’t have enough time for analysis.” A close second was “Department heads hate the budget process. They simply do not put enough thought into it”.

The Chief Complaint of Department Heads : “I do not recognize the final budget number as mine.” That was followed very closely by “The budget templates do not let me budget the way I think.” These complaints are the flip side to Finance’s complaint that the department heads hate the process and don’t put enough thought into it.