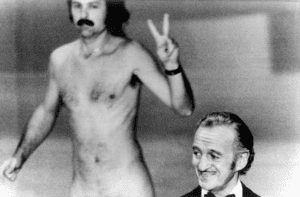 (The Streaker of ’74 behind Oscar presenter David Niven)

For those of you who are squeamish, I apologize for the Streaker of ’74. He won’t show up again in this post, but I have to get your attention somehow. Now on to more serious matters…

When it comes to budgeting, most organizations are not that transparent. The ultimate result of that lack of transparency is an underperforming organization. Why? Because without clarity, good business decisions can’t be made. And since the budget process determines the allocation of resources, those can be pivotal to the success or failure of the organization.

The word obfuscation isn’t used every day, but according to Webster’s it means “To make so confused as to be difficult to perceive or understand.”

Unfortunately, the budget process in many organizations leads to obfuscation rather than transparency. Let’s examine why that is by looking at a typical budget process.

THE REAL BUDGET IS DONE OUTSIDE THE SYSTEM

The form these budget templates take is most commonly a grid, consisting of a list of general ledger accounts running down the page in one column, and list of time periods running across the page in subsequent columns. Since these templates need to be aggregated, they must be uniformed. And to ensure they remain uniformed, they are “locked down” and password protected.

From a budget holder perspective, the task off inputting numbers into the budget template is the last step in the budget process, not the first. If they take the process seriously (a big IF, I know) they first need to develop their thinking behind their budget. That means giving thought to what’s going on in the business, what they’re trying to achieve, and what it’s going to take by way of resources to achieve those things. I know I’m over simplifying, but you get the idea.

So the first point of obfuscation (and lack of transparency) is that the story behind the budget numbers is not captured in the system, but is instead documented on legal pads, post-it notes, or ad hoc excel spreadsheets. It’s not that anyone is intentionally hiding anything; it’s just that the documentation is outside the system and not practically accessible.

GENERAL LEDGER ACCOUNTS ARE… TOO GENERAL?

The second point of obfuscation is what is lost in translation when we budget to general ledger accounts. Here’s what I mean.

The finance department needs to be able to roll up all the budgets across the organization and present a consolidated P&L to the senior executives. That’s the chief reason why budgeting is usually done by G/L account. It also enables the final budget to be loaded into the General Ledger system so that Actual vs. Budget comparisons can be made as the year goes on.

But here’s the problem. Budget Holders don’t run their business thinking in terms of general ledger accounts, and they don’t develop their budgets that way either. For example, Marketing Managers think in terms of Marketing Campaigns. Each campaign may have some Photography (G/L #3000) and some Printing (G/L #4000) and some Advertising (G/L #5000) expenses associated with it. If they plan on running a dozen campaigns next year, at a total cost of $10MM then you’ve got $10MM spread across a dozen campaigns. But it’s impossible to see this because all of those campaigns are nested, buried, inside of just three general ledger accounts. This is a poster child for obfuscation… “To make so confused as to be difficult to perceive or understand.”

Is the marketing department the only example? No, of course not. Think about the typical IT department. They think in terms of IT Projects, each of which may require accounts like Hardware, Software, and Consulting. Or consider the Human Resources department, which may have multiple training programs to budget for, each requiring Outside Professional Fees, Meeting Expense and Meals. I’m sure you can think of your own examples.

I’ll make this one quick. As Finance professionals we aim to please, and when a budget holder says they are too busy or are too confused by the budget template to fill it in, we stand in to help. And “help” often means keying in the budget into the template.

Now whose budget is it?

Well, technically it is still the budget holder’s budget. Right? Maybe in a technical sense, but if something gets lost in translation, or if there has been some misunderstanding or miscommunication, then ownership is not clear… it’s obfuscated.

WHO APPROVED THIS BUDGET ANYWAY?

The fourth big area of obfuscation is in the approval process. Typically, the Finance department sends out the budget templates and communicates a date when they’re all due back in for consolidation. And on or around the due date, the completed budget templates arrive back to Finance.

Okay, here’s a question. Which of those budgets have been reviewed and approved — operationally – by the functional or business areas they report to? Answer, “We don’t know.”

Presumably, all the budget submissions have been scrubbed by successive levels of management before they were submitted to Finance for consolidation. But in reality we know some have and some haven’t. We just can’t say for certain which they are.

There’s no electronic sign off and approval process, no audit trail of approvals. The result is another level of obfuscation.

REQUIREMENTS OF A NAKED BUDGET

Alright, having dwelled on what’s wrong, let’s talk about what can be done to increase transparency. Keep in mind this is blog post, and posts are meant to be brief.

Can more be done to remove obfuscation and increase transparency? Yes, you bet. We have some more ideas but I’m sure you do too. Be sure to offer them up in the comments section of this blog.